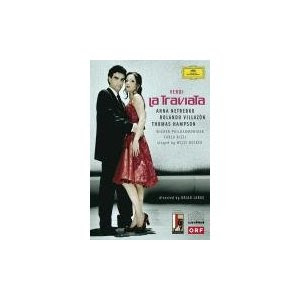 On a delayed flight home on Memorial Day (May 31st, 2010, my wife and I watched the Salzburg 2005 performance of La Traviata with Anna Netrebko, Rolando Villazon, Thomas Hampson conducted by Carlo Rizzi.  This avant garde production known for its "red couch" and simplicity is one to watch over and over.  The music by Verdi is characteristic of this period of his composition style.    The OM-Pa-Pa of the Brindi (Drinking song) is jovial.  Carlo Rizzi conducts at a fast, but manageable pace.
Violetta, played by Anna Netrebko is called by some the whore with a heart of gold.  This performance is full of intrigue, drama, passion & pain.  Netrebko was right not to try and have a redux at next year's Metropolitan Opera, staing that she did not want to try and recreate the Salzburg performance which is widely available on DVD.
The MET will put on La Traviata as a New Years Gala.

Willy Decker’s strikingly beautiful production, a hit when it premiered at the Salzburg Festival in 2005, arrives at the Met with soprano Marina Poplavskaya starring as opera’s most fascinating heroine. “Violetta is an outlaw,” Decker says. “Society shuts her out and looks down on her as a person without feeling, without love. But the further you look into the piece, you see that it’s the other way around: she is the only person in the opera who truly loves, selflessly. Verdi follows her like an obsessed lover throughout the piece, and by the end, our sympathy too is completely on her side.” Matthew Polenzani plays Alfredo with Andrzej Dobber as his father; Gianandrea Noseda conducts Verdi’s timeless tragedy.

Original production of the Salzburger Festspiele; with thanks to De Nederlandse Opera


http://www.metoperafamily.org/metupload/video/2010-11PressConf/Traviata.html
Here is a clip from interview with the director Willy Decker.  This is an incredibly challenging role for any soprano.  We have also seen Netrebko in an updated version of La Traviata in San Franscisco set to the "Roaring 20's".  It is unfortunate, but we may never see Villazon sing again in anything as passionate and skilled as in this production.  He has suffered a "vocal crisis", surgery to remove a polyp from his vocal chords and a very lackluster re-entrance into the world of opera.  He has also served as a rather infamous judge on a show entitled "From Rock Star to Opera Star" a lame attempt at an American Idle rip-off.
At any rate, all 3 principles were in exceptionally rare form.  The minimalist set composed of only a few couches and a clock symbolizing  the march of time towards Violetta's death allow the viewer to concentrate and be immersed in the passion of the drama and the glorious singing.    This was certainly one of the signature roles for Netrebko.  She truly owns this role.
It is astonishing that 45 of 59 reviews at Amazon were for 5 stars!  Netrebko exhudes confidence, sex appeal, tremendous acting ability and a charasmatic charm in this role.  Since that production, neraly 5 years ago, she has had a son, married Erwin Schrott and continued her career as a diva who reaches out to the public and has brought modern opera to the masses.
Enjoy this exciting performance - which can only be imitated, certainly not duplicated.  It will be very interesting to note how this production fares at the MET and its staid audiences.
Posted by Haimes at 12:22 PM 1 comment: 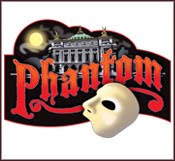 Last Sunday, May 31st we saw Phantom at the Arizona Broadway Dinner Theater.  This was the culmination of a High School Graduation festivity for my nephew, Harry.  The service, dinner and seats were excellent.
Phantom

Developed in the early 1980s by Tony Award-winners Maury Yeston (Nine, Titanic) and Arthur Kopit (Nine), the Yeston/Kopit Phantom – like Andrew Lloyd Webber’s Phantom of the Opera – was based on Gaston Leroux’s immortal tale of a desperate young man, born and raised in the catacombs under the Paris Opera House, and the girl whom he adores. With a lush and compelling score, Phantom is an American musical that has captivated audiences worldwide in over one thousand independent productions, with rave reviews from Variety and The Wall Street Journal.

My only complaint was that the artists used microphones, when the venue was small enogh to project without the use of electronic amplification.  The music was mostly from a black tee shirt wearing synthesizer player who feverishly was orchestrating the entire production.  We saw the final performance and enjoyed it.  It was a tad too long, but provided reasonable entertainment for all to enjoy
Posted by Haimes at 11:28 AM No comments: