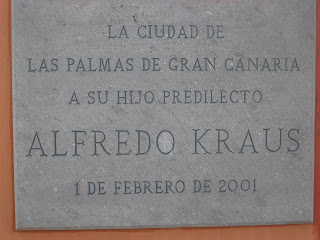 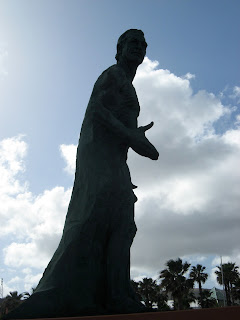 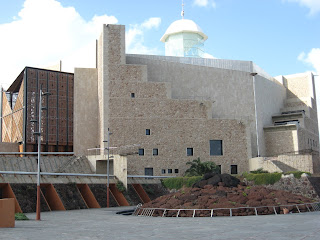 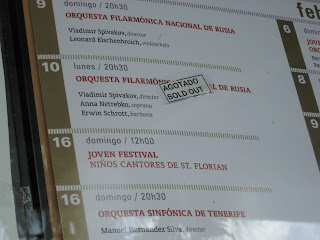 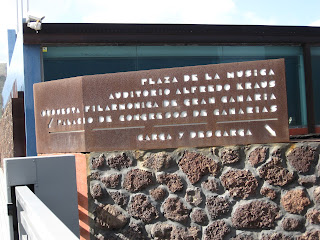 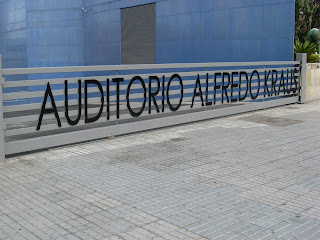 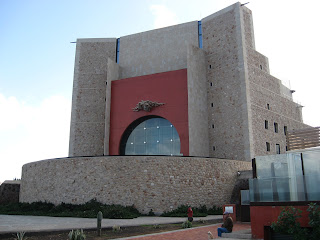 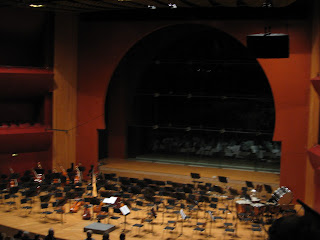 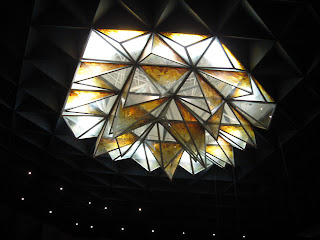 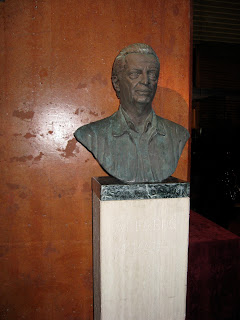 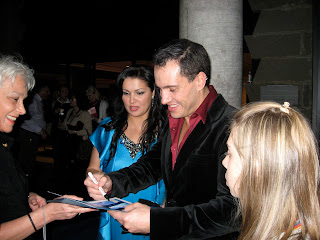 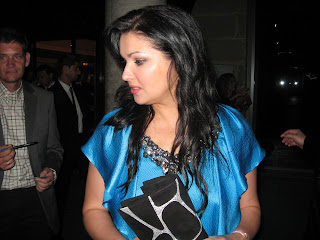 The concert by Anna Netrebko and Erwin Schrott was a huge sucess and enthusiastically received by all attendees.  Anne's pictures are indeed fabulous and there is little to add other than the few that I have attached.  Herbert's commentary was excellent and reflects the general nature of the evening in Las Palmas.  The programme was identical to the one played in Tenerife.  The Alfredo Kraus Auditorium is a beautiful venue overlooking the Atlantic Ocean.  The orchestra led by Vladamir Spivakov was simply outstanding.  They played with assurance and clarity.  The tempos were brisk and exciting.  Spivakov was expressive, graceful and lovely to watch.

Anna appeared first in ther stunning form fitting royal blue gown and was simply ravishing.  You immediately noticed the incredible size of her voice.  The first piece by Glinka was new to us, but showcased her talent and comfort on the stage.  She sang with such great confidence, poise and panache, and knew well how to connect with the audience.  She had no need to sing at the foot of the stage since her voice carried well with much ease.  Many of the other pieces were very familiar.  The highlights of the evening were Erwin greeting the audience in Spanish and sing a tango, accomapanied by an accordian.  During his duet with Anna as Adina in L'eIlisir D'amore, Schrott as Dr. Dulcamara, sold a bottle of magic elixir (wine) to a gentlemen in the first row of the audience who gave Erwin some Euros.  This bottle of wine was delivered on stage by Schrott's adolescent daughter.  Thankfully, a second bottle was on stage to continue the aria.  It was just a very funny moment.  Their duets were passionate, frequently ending with warm embraces and tender kissing as only lovers can portray.

Erwin's portayal of Leporello in Don Giovanni is simply one of his signature roles.  He sang it with a book depicting his amorous conquests all throughout Europe, with special emphasis on Espania.
Anna's rendition of Gounod's Jewel Song from Faust was memorable.   It was particularly exciting when Erwin completed this selection with his vivid interpretation of Mephistopheles.

In the second portion of the program Anna wore a magnificent pink chiffon gown while Erwin sported a black, sequined velvet blazer. What a stunning couple! Their Gershiwn "Porgy and Bess" duet was full of passion and I was particulary impressed that the National Russian Orchestra was able to accompany the singers with such ease.  It is amazing that the orchestra performed Russian, German, French, Czech, Spanish and Italian music so superbly...a truly well deserved compliment to Maestro Spivakov.

Erwin sang the tango with a microphone to great success.  The highlight of the evening was a local folk song from Gran Canaria that was full of passion, syncopation and featured the brass and percussion (castanets) sections.  It was introduced to audience by Spivakov.  This brought the audience to its feet in a rousing standing ovation.  It was simply amazing to see Russian trained musicians play such a Latin based melody with ease and a high level of technicality.

We reflected on the difference between recital and fully staged opera, and concluded that Anna's true ability is only reflected in her uncanny acting. While this concert was a success by any standard, it left us wanting to see more.  Having recently seen her in Don Pasquale at the MET as well as many other operas with her, we feel that Anna's true calling is opera.  From Traviata, I Puritani, Romeo & Juliet, Tales of Hoffmann, Lucia, La Boheme and others we have been fortunate to watch the maturation and development of this wonderful singer.  It is eminenly clear that not only does she enjoy what she is trying to communicate, but her unusual dark Slavic voice has set her apart from others.

The highlight for Paula and myself was to meet Anne Fischer-Boertzler, her husband Ludi, and her parents.  Indeed we shared many stories about our love for good music and opera.  Anne is poised, classy and certainly enhanced our visit.  We spoke briefly before the concert and then more extensively afterwards trying to get an aiutograph from Anna.  Anne translated for her parents who quickly understood our mutual love for opera.  Anne, to you we owe a debt of gratitude (for guiding me on how to secure tckets via Gran Canaria's ATM) and more importantly for establishing a warm new found friendship via Facebook.  As many of you know, Facebook started at Harvard, and is a tremdendous sucess in allowing people to connect to share common interests.  To all of my music friends and especially Carlos, we are very thankful. Anna and Erwin departed quickly with his daughter, but I was able to get 2 photos.  I told Anna that we will see her next month in Beaver Creek and she exclaimed "That's Great."   Spivakov waved to the small gathering before departing.
Posted by Haimes at 12:20 PM 1 comment: