This is a fabulous CD of Baroque music.  Joyce, a mezzo soprano from Kansas is celebrating her accomplishments and will be performing the music from the album in Kansas City’s Harriman-Jewell Center (November 16th), NYC’s Carnegie Hall (November 18th) and Sonoma California’s Green Music Center (November 20th).  We are thrilled to attend this recital at Carnegie Hall.

We last saw her in Marie Stuarda in Houston which she will perform at the Metropolitan opera later this year.  It is of interest that she is choosing to follow the same path as Cecilia Bartoli in uncovering old and rarely performed music. 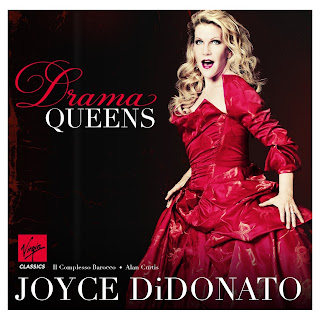 Posted by Haimes at 7:25 PM No comments:

What a great performance at MET of Elisir D'Amore with Netrebko, Kwiecen and Polenzani.  We were fortunate to have been there while this was being broadcast around the world.

L'Elisir D'Amore at the Metropolitan Opera

We had a grand time this performance.  Polenzani was wonderful and sang an eloquent Una Furtiva Lagrima which really was sung well and he seemed to float the high notes with just elegance.  Mariusz Kweicen was his jocular self and suited well to this role.  Anna Netrebko simply fills the hall with a lustrous voice that has risen in stature, color and timber.  She moves effortlessly and sings radiantly.  This was simply a great cast that worked well together.  This was a new and controversial production by Bartlett Sher which kept many of the opera's main venues intact.  This was radically different from last year's production which featured Diana Damrau and Juan Diego Florez in a production that could only be characterized as a set full of pink cutouts.

The new production made great use of a proscenium which seemed to make the stage space small and more confined which may have helped the artists.  Since this was a live HD performance broadcast to many theaters in the US and Europe and elsewhere it had to meet its great challenge.  From many comments from my facebook friends, it simply was a remarkable event.  The orchestra was conducted by Benini who is no stranger to the MET.  He seemed to keep the music in line with the artists in a rather seamless effort.

Netrebko is no stranger to this role having previously sung this with Rolando Villazon at the Wien Statsopera and St. Petersburg.  She has recently said that she will abandon her "Ina" roles such as Norina in E'Lisir, to concentrate on more dramatic and heavier roles such as Leonora in Il Trovatore.  We all await her upcoming DG Verdi album.

We had the opportunity to meet another Facebook friend at the gift shop during intermission and share stories about our love of opera and the remarkable persona and voice of Anna Netrebko.  Anna is very gracious and generous to her fans snapping pictures and signing autographs at the stage door.

We met Matthew Polenzani last year after a lackluster performance of Wily Deckker's La Traviata at the MET with an ailing Natalie Dessay.  He did not appear to be engaged in that role, but it is clear that he has now developed both the mental focus and ardor required of a great tenor.  Polenzani was engaged in E'Lisir and judging from the intermission interview it appears that he adores Netrebko as an artist an person.  From his bookings at the MET, he is now becoming a "regular" something that will surely raise his exposure and ability to sing new roles with high level casts.
Posted by Haimes at 8:07 AM 1 comment: