Norma at Caramoor
Every year, Caramoor this hidden gem in Katonah, New York puts on a Bel Canto Festival.  Under the tutelage and conducting of Will Crutchfield puts on a spectacular show.  Caramoor is a Venetian type of venue in which performance are held in an large billoowing tent that faces a Venetian style stage.  Despite a blistering hot evening with high humidity, the singers and orchestra played out their roles with passion and intensity.  We have seen Sumi Jo there in I Puritani and Vivica Geneaux in La Cenerentola last year.  This year was no exception.  Angela Meade, one of Met finalists played the role of Norma and sang with great assurance.  She was also highlighted in the movie "The Audition" about the MET finalists and the audition process.  She sang Casta Diva (Chaste Godess)  in the MET audition and has risen to the occasion in this performance.  Angela Meade played the Druid Priestess Norma while the mezzo soprano, Keri Alkema played Adalgisa with superb intensity.  Their duet, Mira O Norma in Act two, scene 2 was thrilling.  Historically, many will recall Sutherland and Horne in this role.  The most notable Norma of the recent past was most certainly Maria Callas who sang the role witth great intensity, passion and drama.  I only wish you were all there to enjoy a very memorable evening.  Angela who has sung at the MET in Ernani surely has a great career ahead of her.  The evening started off with a preconcert lecture retrospectively looking back at the attempts in this role.  The audience reactted with great enthusiasm and praise. It was a wonderful joyous evening of truly beautiful singing.  Bellini would have been proud.  The weather and the singing were both on fire! 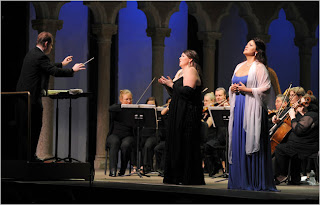 Barbra Streisand at the Village Vanguard 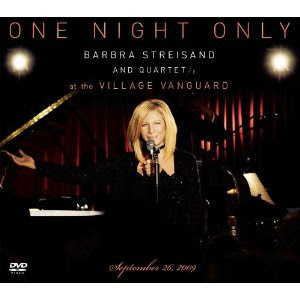 Barbara Streisand at the Village Vanguard is a newly released DVD/CD combo recorded at a life recital in Greenwich Village in 2009.  While, the DVD is recorded with a live audience through somewhat limited audio capabilities it offers a unique and personal view of this artist.  In between some of her selections, she welcomes & greats many notables including Bill and Hillary Clinton, Sarah Jessica Parker, Nicole Kidman and those who played a large part in her long lived career.  It is refreshing to hear that this dynamic star has not forgotten her roots in Brooklyn, NY.  From a humble and modest background comes a wonderful entertainer who has the tremendous ability not only as a story teller, but can convey emotions through her talented singing.  At 68, she can still wow and audience with charisma, charm and vocal prowess.  The DVD and CD (containing truncated dialogue) offer a diverse glimpse into her history and growth as an artist.  It is of interest that she indicates that she gets bored singing "People" but her send off with Memories evokes visions of the 1970's and "The Way We Were" filmed at my Alma Mater, Union College in Schenectady, NY.  A committed democrat and liberal, she recounts protesting with Bela Abzug, the NY congresswoman.  Her tribute the President Bill Clinton for 8 years of prosperity and respect around the word closes with a comment that Bill was at ease with the poor and downtrodden as well as the mightiest leaders of the world.  She sings his favorite song, Evergreen which she wrote and sang at his inaguration.

This is a wonderful refreshing retrospective, not simply a re-hash of old standards.  She sings with ease and grace and at one point asked the pianist of she had hit the correct note.  The crowd was engaged, adoring and composed of celebrities and to those who had won lottery tickets for the specail one night show,  As the evening starts, she indicates that this is how she got her start in show business and she wanted to give something back.  What she delivered was truly from her heart.
Posted by Haimes at 12:33 PM 2 comments: