My wife and I had the marvelous pleasure of enjoying a performance of Rossini's La Donna Del Lago (Lady of the Lake) at the Santa Fe Opera this past Saturday night.  It is a beautiful venue and had a stellar cast of Joyce DiDonato, Lawrence Brownlee and Marianna Pizzolato.  While I thought Lawrence Brownlee was a little light or weak in the first act, he rose to the occasion in Act 2.  The surprise for me was the mezzo, Marianna Pizzolato who sang with depth, color and confidence.  The only other time I had the pleasure of listening to her was on the Pergolesi Stabat Mater with Anna Netrebko.  The opera was full of drama, passion and fantastic bel canto singing.  Joyce Di Donato had previously performed the same opera at the Royal Opera House in London with Juan Diego Florez and Daniela Barcelona to great acclaim.  Having seen the DVD of the latter production, I found the sets at Santa Fe to be spartan and it let you concentrate on the fabulous singing.  Ms. DiDonato did not disapppoint and had the audience in the palm of her hand for her fiery final aria.  She took encore and standing ovations graciously and invited the rest of the cast to join her.

A Mysterious Beauty With a Secret Identity.

La Donna del Lago is Rossini’s most romantic masterpiece. Why is it so infrequently seen? One reason: the formidable demands of the title role. Fortunately, Santa Fe audiences will see it performed by the fabulous mezzo-soprano Joyce DiDonato — who has earned acclaim for it in world opera capitals including Milan and Paris. Leading bel canto specialist Marianna Pizzolato sings Malcolm, and sought-after coloratura tenor Lawrence Brownlee sings Uberto. Stephen Lord conducts.

In Sir Walter Scott’s The Lady of the Lake, the heroine is introduced as “a monument of Grecian art . . .  the guardian Naiad of the strand” – an un-clichéd portrait of Scottish beauty. In the Royal Opera’s new version of the “melodramma” Rossini based on Scott’s poem, she is first glimpsed as an exhibition frieze in a glass box. No cliché there either. That opening scene tells us we are witnessing a case study in cultural archaeology, as related by Scott (aka Serano, a minor character) to a chorus of early 19th-century academicians.


Scott’s popularisation of Scotland as a romantic place, locked in a semi-fictional past, was as misleading as the current image of a nation hell-bent on independence – but his massaging of reality was exactly what Rossini needed. It gave the composer a suitably mythical backdrop against which to profile the pyrotechnical vocalism his Neapolitan public craved.

This is a gorgeous venue that we have visited before to see Natalie Dessay in Bellini's La Sonambula and Handel's Aggripina both in outstanding productions.  In fact, we preferred the Santa Fe La Sonambula to the confusing Mary Zimmerman La Sonambula at the MET.

Peter Gelb, the general manager of the MET was in the audience and has promised to bring this opera to the MET in 2014-15 season.  Let's hope that he will live up to his word, as this rarely performed Rossini opera in a gem.  As you can see from my photo, this is a covered venue that is open to the environment.  One frequently saw heat lightning in the distance.  The orchestra and chorus was robust and supportive. 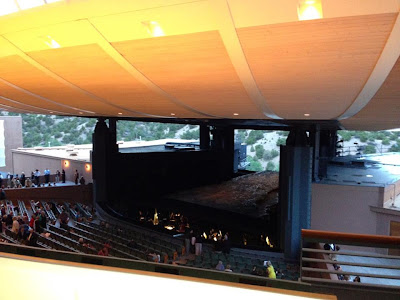 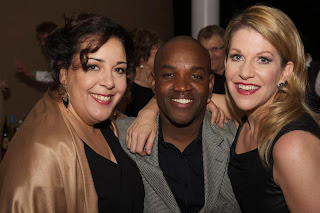