Boston is of course a city filled with institutions of higher learning and abundant musical avenues.  The Longwood Opera fills a unique niche giving amature singers a place to showcase their talent, charisma and a place just to have fun.

The Longwood opera may have taken its name from famous Longwood Medical Area intersected by Brookline and Longwood Avenues.  (There is also a very notable Longwood Symphony led by Charles Ansbacher, a local icon).  For a nominal charge, one can sit in the Christ Episcopal Church in Needham and hear several hours of varied music.  J Scott Brumit is largely responsible for this marvelous effort along with Jeffery Brody, the music director. 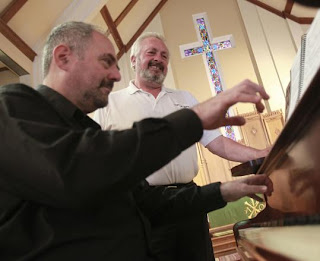 Since the summer is quite warm and the church is not air conditioned, there are electric fans and complimentary fans passed out each week.  Each week, there is a diffferent theme, but you never leave disappointed.  Refreshments (lemonade & water) are served along with M&M selections during intermission.  We have attended for many years and it is easy to say that the standards are improving steadily.  Most of the efforts by the performers are quite nobel and genuine, while a few are somewhat less that satisfying.  Much of the repetoire is well known, but selections by Humperdinck, Barber, Baby Doe and others are frequently interspersed.  At times you wish the singing would never stop. e.g. Puccini. The schedule for 2010 is presented below.

As you can see, they also did a very abridged version of "The Ring" sung in English.

Hats off to all of the performers and volunteers at the Longwood Opera as we always leave with a warm feeling of good camaraderie.  We have conversed with several performers and indeed made friends of parents of the performers.  On a somewhat humourous aside, the women usually dress much better than the men.  You realy have to admire the dedication of the performers to rehearse, prepare and deliver the goods.  As we have begin to know some of the performers, one can only truly appreciate their dedication.  Opera is far from dead and these individuals as mentors and performers will keep Opera alive.  They even have a tee short which is emblazened with Opera for All.  In years past, they have sold records, tapes and CD's that were given by donation.  Tickets available at the doors are a very good value, parking is available across the street.  Bring your hearts, ears and soul and you will be more than amply entertained.
Posted by Haimes at 12:06 PM